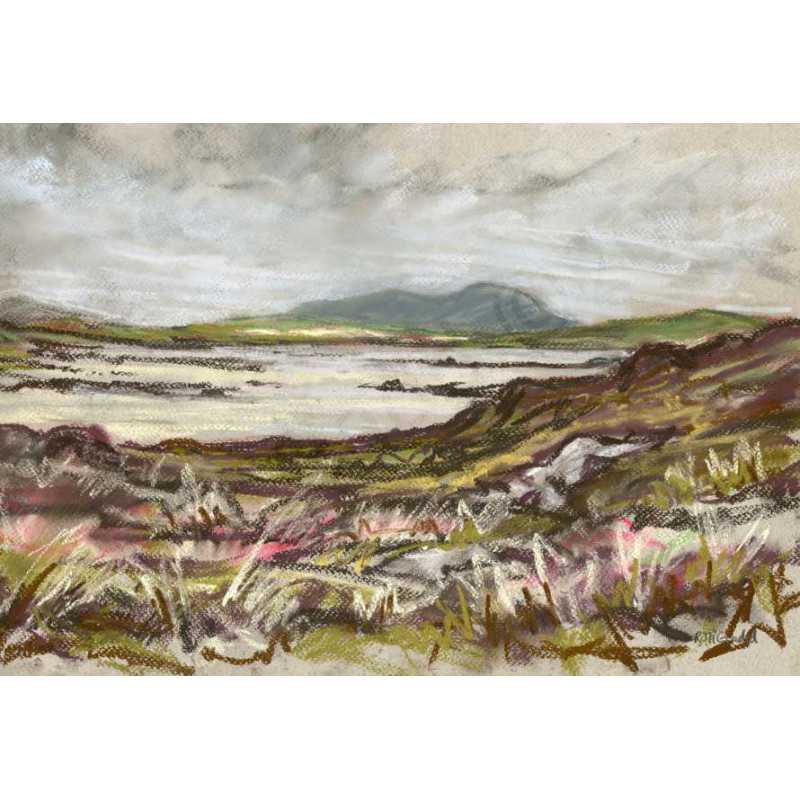 Supplied rolled in tissue in a sturdy tube for safe delivery.

Please note: the watermark is shown for copyright purposes only and is not included on the supplied print.

Eve, with knowledge in hand, contemplates. She stands holding the so-called Forbidden Fruit, on a path strewn with Northern summer flowers. The Tree of Knowledge beside her, where she herself took the apple, is laden with ripe fruit. Two beautiful blue tree snakes hunt for mice; one mouse has eaten a piece of the Forbidden Fruit. And the two little birds, attracted by the ripe apples, are wary of the snakes and one takes flight. The snakes have no interest in the contemplating Eve. They are simply in their natural habitat. The Tree of Eternity, behind the Tree of Knowledge, with it’s own lovely little fruits, is there because it was said to be there by someone …. so there it is. I am sure the seeds in the fruits will mean that life as we know it on Earth will continue -

Eve will walk on the path past the same rocks that are in Michaelangelo’s painting of the Sistine Chapel ceiling, in Florence, depicting the Expulsion from Paradise. And beyond this ‘Paradise’ is golden opportunity, represented by gold leaf, forming a new landscape in the distance. It is not the bleak barren wasteland represented in Michaelangelo’s painting. A little old tree stands at the edge of the two worlds, with a pointing finger formed of an old branch. In Michaelangelo’s painting the same tree is seen, and acts as a warning of the devastation beyond this so-called paradise. But in this painting it has been brought to life in the Chinese way of thinking, and has become an old pine, representing stoicism in adversity, as one of the Three Friends of Winter, and also represents longevity. It has become a friendly old marker showing the way to a new world.